Anyone who has had a conversation with someone affected by aphasia is probably familiar with the ‘20 Questions’ approach to resolving communication breakdowns. Asking questions helps us take the piece of the message we understand (or think we do!) and build on that to gain more insight into the communicator’s intent. Take this exchange between a woman, Sandy, and her mother-in-law, Joan. Joan had a stroke a few years back and has both aphasia and dysarthria.

Questions are enormously helpful when communicating with someone like Joan, whose speech is difficult to understand. Using the ‘20 Questions’ approach, though, isn’t always effective and is almost never efficient. In this post, we’ll talk about strategies to help people with aphasia communicate more clearly with their partners.

Supplementation strategies are strategies that we teach the person with communication difficulties to use in addition to their natural speech or other communication. People with aphasia often have motor speech problems, such as dysarthria or apraxia. By pairing the new strategy with their existing means of communication, the partner is better able to figure out what is being said. They can increase intelligibility of spoken messages in people whose speech is marginally intelligible (e.g., Hustad, 2001).

Alphabet supplementation refers to indicating the initial letter of the word being conveyed. Having just that little bit of information can help the communication partner be a better guesser when they hear the message. In the example above, Joan says  “Yahyahyah.” If she has used alphabet supplementation, she would have first pointed to the letter ‘H.’ In this context (i.e. talking about someone who had an accident and was hurt), her daughter-in-law, Sandy, might have guessed that  “Yahyahyah” was ‘hospital.’ It isn’t a perfect solution, because guessing is still involved, but when the partner knows the context it can aid comprehension of the message. In one research study (Hanson, Yorkston, & Beukelman, 2004), alphabet supplementation increased the intelligibility of sentences by almost 26%.  One problem with alphabet supplementation for people with aphasia,though, is that often they can’t think of the word they want to say. And if you can’t think of the word, you can’t spell it. And if you can’t spell it, you can’t use the alphabet to give your partner a hint. You can get copies of the alphabet cards we made in the e-tool box or by clicking on the sample image. 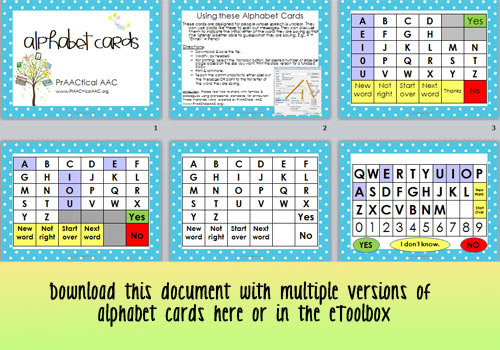 Another supplementation strategy involves teaching people with aphasia to tell us the general topic before they start communicating the actual message. If Joan had started her conversation by indicating that she was talking about ‘Friends & Neighbors,’ then Sandy may have guessed gay/Kay more easily. Topic supplementation allows the listener to focus on words within a certain topic area.  Research on this strategy shows that it improves comprehension single words by about 29% (Hanson, Yorkston, & Beukelman, 2004). Not that  much, some might say, but sometimes that can make the difference between an effective exchange of information and utter frustration. The cards for topic setting that we are sharing here are generic in nature. While these may work for some clients, you may want to adapt them to the unique needs of the person with whom you’re working. That way, you can include the names of people, places, events, and objects that are relevant to their lives. The more relevant the communication tool is, the more likely they are to actually use it.

One final point about supplementation strategies: They have to be taught. It’s not likely that a person with aphasia will be able to automatically use these strategies without intervention. Some may pick it up quickly, but other clients may need to have this as a goal area for quite awhile. Supplementation strategies – both alphabetic and topic – enhance our ability to understand unclear speech. If you’ve used these with your clients who have aphasia, we’d love to hear about your experiences. When Language Is Lost: AAC Supports for Individuals with Aphasia How Much Do We Understand When Context Cues Are Removed?