From Wheelchair to Walker: The Cascading Benefit of Hands-Free Mobility When young children with significant motor challenges are unable to move freely around the environment, it impacts many things. Today, 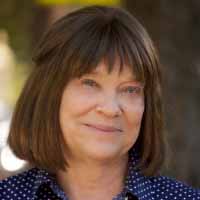 we introduce a limited series on why hands-free mobility is so crucial during the early years, and what we can do to promote independent mobility. We are extremely fortunate to have Christine Wright-Ott authoring this series. Christine is an Occupational Therapist and consultant at The Bridge School in Hillsborough California. She authored the chapter, Mobility, in several editions of the book, Occupational Therapy for Children. Christine lectures at universities and conferences including ATIA, Closing the Gap, ISAAC, ISS, and AAC by the Bay.

Why Hands-free Mobility Matters for Children with AAC Needs

Speech-language pathologists and occupational therapists have long been aware of the many ways that mobility and communication go hand-in-hand.  Without a way to move around, a child’s opportunities for incidental learning and motivation to communicate are severely constricted.  AAC specialists have even commented on the way independent mobility (e.g., a power wheelchair) can thus serve as a powerful augmentative communication tool (Nilsson 2011), (Sarah Blackstone, personal communication). But what would happen if we went “a step beyond” wheelchair mobility and got very young children to move around in an upright hands-free walker?

How might that impact their language development, their cognitive growth, or their psychological and social-emotional development, or their physical well-being and health?

At the Bridge School in Hillsborough, California, I have been working for the past 15 years with a gifted team of speech-language pathologists, teachers, instructional assistants and assistive technologists to explore the benefits of hands-free walker mobility.  In concert with the school’s many other innovations for children with significant physical limitations, complex communication needs and, in a majority of cases, significant visual challenges due primarily to cortical visual impairment (CVI), the results have been remarkable! My passion as an Occupational Therapist is to share with clinicians, particularly speech-language pathologists, occupational therapists and teachers, the many benefits of providing children with physical disabilities opportunities to experience self-initiated standing mobility with hands-free support walkers.  Support walkers, also known as gait trainers such as the Pacer (Rifton), KidWalk and ProneWalk (Prime Engineering), Grillo (Mobililty-USA) and Mustang (r82) are available for even the youngest child with a mobility impairment (Wright-Ott, 2015.)  To appreciate the significance of providing self-initiated mobility for a young child with a disability, one must first understand the changes that occur in the brain of a typically developing infant after experiencing locomotion.  After infants begin to walk, a cascade of developmental changes begin to occur in the psychological, perceptual, spatial cognitive (wariness of heights), visual proprioception, spatial memory and social-emotional domains, irrespective of age (Adolph 2014, Anderson et.al., 2013, Kretch et. al., 2013.) Studies suggest that language development is accelerated when infants begin to walk, and the acquisition of locomotion in the typical infant is associated with a significant increase in both receptive and productive language, independent of age (Walle et. al., 2014).  Oudgenoeg et. al., (2012) concluded that the attainment of walking propels linguistic development. A few studies have considered the role of locomotion in children with physical disabilities.  Campos et. al., (2009) concluded that children with spina bifida, who were not yet crawling, performed poorly in a 2 position hidden object task (14% correct) but improved (65% correct) following delayed onset of locomotion, supporting the premise that locomotion contributes to spatial cognition and memory, even in a child with a physical disability.  A longitudinal study by Rivera, (2012) of seven infants with spina bifida, who were tested on three spatial-cognitive paradigms prior to and after the onset of independent crawling, confirmed previous findings that infants delayed in the onset of locomotion due to neurological or orthopedic reasons demonstrated a delay in the development of spatial-cognitive skills.  Rendeli, et al., (2002) studied the effect of locomotion on cognition of children with Meningomyelocele and concluded that children who achieved ambulation, either with or without aids, scored higher on the performance IQ portion of the WPPSI or WISC-R than did children who were independently mobile in a wheelchair.  The authors suggested that self-produced locomotion led to better visual-motor organization.

It is empowering for clinicians and teachers to understand that walking is more than a major milestone in a child’s development and that self-initiated mobility is a powerful force propelling a child’s cognitive, psychological, language and social-emotional development.  Locomotion is not only a means of transportation, it is a means for transformation of the brain!  Post #2 will describe how The Bridge School, a private school for preschool and elementary students with complex communication and physical disabilities, incorporate the use of hands-free support walkers into the curricula and the observed benefits in peer interaction and physical access to activities.

Look for Christine’s second post on this topic next month. How We Do It: AAC Strategies & Adaptations for Students in Support Walkers, Assessment & Funding How We Do It: A Support Walker Mobility Program for Elementary Students with AAC Needs Video of the Week: Parent-Implemented AAC Intervention for Young Children